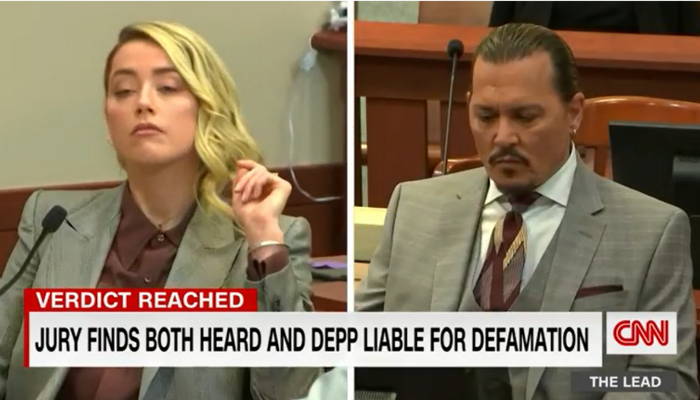 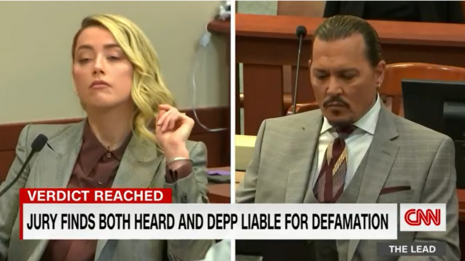 Now that a jury in Fairfax County, Virginia mostly sided with actor Johnny Depp in his defamation suit against his ex-wife, actress Amber Heard, The Washington Post editorial-page staff published a mea culpa of sorts on Sunday’s op-ed page. An article by their media critic Erik Wemple headlined “The Depp-Heard case hinged on the world’s worst #MeToo op-ed.”

The 2018 op-ed spurred the suit, although Depp’s lawyers did not sue the Post.

Heard has long accused Depp of being a “wife beater,” and Depp has denied it. In this case, Heard proclaimed she had become a “public figure representing domestic abuse.” Wemple didn’t mince words:

The op-ed underlying all this madness was an assault, too — against journalism. It embraced a cliched op-ed design, that of deploying public figures to braid their personal experiences with policy prescriptions. “I was exposed to abuse at a very young age,” reads the piece’s opening. “I knew certain things early on, without ever having to be told.”

…the Heard op-ed raised questions that it never answered. In what way did she “represent” domestic abuse? What were the specifics of the backlash to which she refers? What did it mean to see “in real time” how institutions rally around accused men? The Post didn’t even include a link in the piece to fill in the context for readers.

It seems obvious that the Post wanted to publish a splashy #MeToo op-ed, and relaxed all their presumed standards to get it, starting with the ACLU writing the article!

Having secured a $7 million divorce settlement, Heard pledged $3.5 million to the ACLU over 10 years. Just months before her op-ed appeared in The Post, Heard became an ACLU ambassador “for women’s rights, with a focus on gender-based violence.” It was a staffer at the ACLU, according to testimony from ACLU general counsel Terence Dougherty, who approached The Post’s Opinions section about publishing an op-ed bearing Heard’s byline.

The first draft came off the keyboards of the ACLU, via consultation with Heard. Four lawyers at the ACLU reviewed it to ensure that it aligned with the organization’s policy positions. Heard’s lawyers separately scrubbed it for compliance with a nondisclosure provision of her divorce settlement, according to an ACLU spokesperson.

So Heard’s celebrity conferred standing at the ACLU, which then leveraged her name into a Post op-ed. The byline was accurate only to the extent that the ACLU tried to craft a piece consistent with Heard’s spoken views. Which is to say, not very accurate. Kris Coratti, a Post spokeswoman, says that the opinions section has a standard form seeking attestation from op-ed writers that they actually wrote the work under their bylines, though it’s uncertain whether it was requested in this case.

“We recognize that many writers receive help with their pieces at various stages along the way,” notes Coratti in an email, “and the involvement of the ACLU in the piece was disclosed to us. We also disclosed to our readers Heard’s relationship with the ACLU, as she did in the body of the piece.”

Wemple noted the Post added an editor’s note, but argued it “avoided taking a position on the Virginia jury’s verdict, and amplified the weakness of the piece itself — which was that The Post was taking a shortcut to this controversy, forgoing the journalistic effort required to piece together a bona fide #MeToo story.”