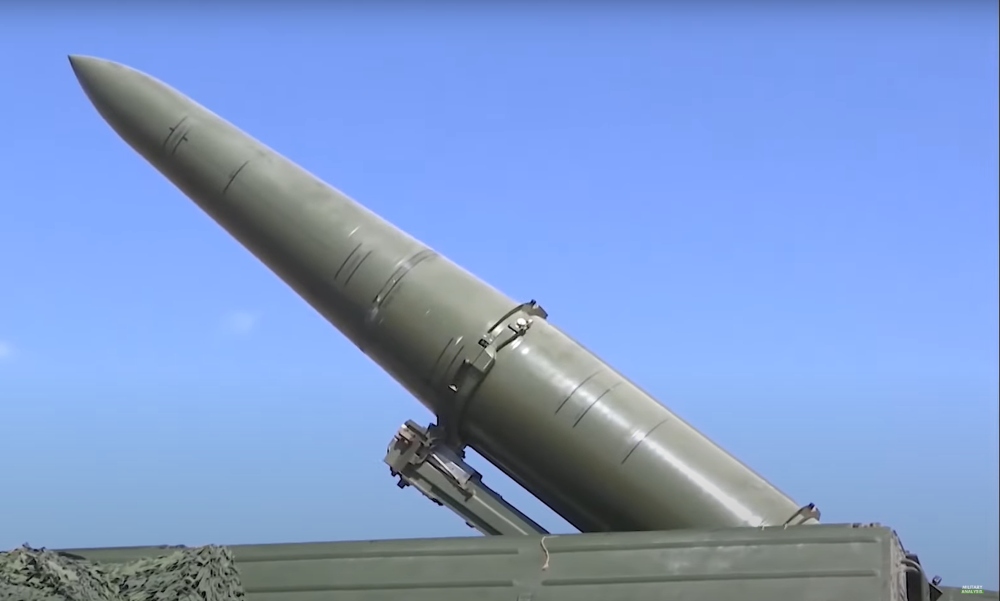 (Natural News)
When the Soviet Union collapsed in 1991, Russia, the biggest state in the USSR and around which the alliance was formed, inherited the bulk of weaponry it had arrayed against NATO.

That included a massive amount of ballistic missiles, many of which have remained in service and now form the backbone of Moscow’s A2AD — “anti-access/area denial” strategy for the allied security alliance.

But of course, not all of Russia’s ballistic missile stockpile, the largest in the world, is aged. In fact, many models are fairly new and all are extremely lethal, including the Iskander-M, a short-range ballistic missile (SRBM), which NATO is particularly concerned with.

“The SS-26 Iskander missile has a range of approximately 400 to 500 kilometers, or about 250 to 310 miles,” The National Interest reports. “It can carry a variety of warhead types, including earth penetrator, high explosive or thermobaric.

In addition, the report noted that the Iskander is also very accurate. It uses a combination of “inertial, GLONASS, and radar terrain correlation guidance, the missile can strike targets within a circular error probable (CEP) of 2 to 5 meters” — GLONASS being Russia’s version of our GPS.

In other words, the missiles have a 50 percent chance of landing some two to five meters away from a target, versus older SCUD-D missiles that have a CEP of 50 meters, making them far less accurate.

What’s also notable about this model is that Iskander transporters are capable of carrying two missiles at one time in a side-by-side configuration. Also, the transporter features an armored roof to protect the cargo inside while the cabin itself also shields occupants from chemical biological, and nuclear hazards. Reloading vehicles that travel with the missile transporters on a battlefield are capable of reloading them quickly via a crane, the National Interest reported.

“The Iskander system is deployed in Russia proper, as well as in Kaliningrad, an important Russian exclave next to Poland and the Baltic Sea. From Kaliningrad, the Iskander can hit targets in Poland, parts of eastern Germany, southern Sweden, Latvia, Lithuania, Estonia, Belarus and a great part of the Baltic Sea,” the outlet added.

“Kaliningrad-based Iskanders are an excellent example of Russian coercive diplomacy. From the exclave, Russia can hit targets in most of the Baltic Sea, threatening an important shipping route, and hit NATO targets. Since the Iskander system does not carry a nuclear payload, there is less risk of causing a nuclear confrontation.”

There aren’t many countries that have bought the systems, however. Just two — Armenia and Algeria in 2016 and 2017 respectively — have done so, though, since 2005 several countries including Iran, Syria, South Korea, India and the United Arab Emirates have expressed an interest in buying them over the years.

Recently, according to WorldCrunch.com, President Vladimir Putin put his nuclear forces on alert — “a shock for many, but even more so for those just across the Polish border from Kaliningrad where Russian nuclear missiles are stationed, and aimed at European capitals from Warsaw to Berlin.”

“In the immediate vicinity of this Polish tourist town, there are three special features: a picturesque lake, a renowned health spa — and Russian weapons of mass destruction. The small town of 14,000 inhabitants is located directly on the border with the Russian exclave of Kaliningrad,” the report continued.

Putin’s likely becoming more desperate to end the conflict he started, as well. He has sent his conscripts into an unexpected meat grinder which is why his forces are indiscriminately bombing Ukrainian cities into rubble, just like German forces did after Hitler invaded the Soviet Union in 1941.

Iskander missiles are part of that equation, and NATO knows it.