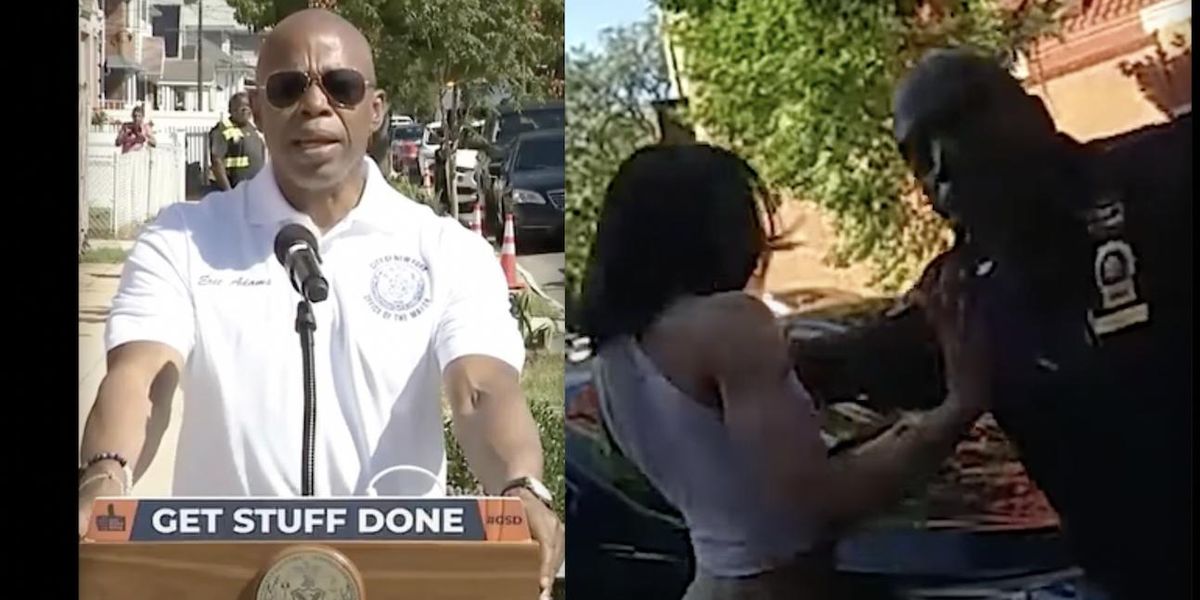 New York City Mayor Eric Adams backed the NYPD officer who decked a woman earlier this week after she “smacked” the cop during an arrest of an attempted murder suspect — and Adams also said officers at the scene in Harlem exercised “great restraint,” the New York Post reported.

“We had a person that was wanted for attempted murder — attempted murder,” Adams said. “Police officers found him. He was armed with a ghost gun in his belt. Those officers showed great restraint. They didn’t discharge their weapon[s]. They subdued him.”

Adams also recounted that “a crowd came and attempted to disrupt the arrest. The young lady came, smacked a police officer, the police officer responded. I think those officers on the scene showed great restraint. They did what the system called for. They didn’t turn off their body cameras. That’s why we have footage of what happened.”

The mayor added that “people got in and interrupted while police were taking action — that just can’t happen,” the Post reported.

Officers on Tuesday were arresting 22-year-old Elvin James — a suspect in an Aug. 12 case of attempted murder, the New York Daily News reported.

The officer in question — uniformed Detective Kendo Kinsey — attempts to move Crum away, and she and Kinsey engage in a shoving match as Crum yells, “Don’t f***ing touch me!” and “Get offa me!” before Kinsey knocks her to the sidewalk with a big swing of his right hand. Kinsey and another officer then pick up Crum and handcuff her.

NYPD Commissioner Keechant L. Sewell said in a statement accompanying the bodycam video that Crum “began to interfere with the arrest, including striking a detective. The detective fended off that interference and struck the woman with an open hand.” He added that Crum “remained conscious, and was transported to an area hospital at her request.” Sewell also noted that the incident, “including the conduct of the detective who used force, is under ongoing review by our Internal Affairs Bureau’s Force Group.”

What happened to Crum and James?

The Post reported in a separate story that the attempted murder allegation against James is under investigation and that court records indicate he was charged with two counts of second-degree criminal possession of a weapon, resisting arrest, and seventh-degree criminal possession of a controlled substance over a bottle of 20 oxycodone pills allegedly found in his pants pocket.

Crum and James pleaded not guilty at their arraignments Wednesday night, the Post said, citing the Manhattan district attorney’s office, which added that Crum was released without bail while James’ bail was set at $300,000.

Lawsuit threats — from both sides

“This has to stop, and we are seeking full accountability in this action,” attorney Jamie Santana Jr. said, according to the station.

“You mean to tell me a grown man more than twice her size in weight could not handle a 19-year-old female in a different manner?” Santana also asked, according to WABC-TV.

Community members gathered outside the 32nd precinct where Kinsey works and demanded that he lose his job, WNBC added.

“The question is: When did it become a tactic for crowd control to knock somebody else unconscious?” Rev. Stephan Marshall of the National Action Network asked, according to the station.

“He cold knocked her out,” Crum’s grandmother added, according to WABC. “He’s no better than the people [who are] knocking out people in the streets.”

But officials from the Detectives’ Endowment Association indicated they are considering filing a civil lawsuit on Kinsey’s behalf, WABC added.

“When you assault a New York City detective in order to interfere with an arrest of a man armed with a gun there are repercussions,” Paul DiGiacomo, president of the DEA, told the station.

Author Sophie Lewis’ forthcoming book is titled ‘Abolish the Family’
No Matter What Happens in Iran, the Women Have Already Won
Watch: Biden Slips Up and Finally Agrees with Republicans About Necessity of AR-15s
Slapped with another temporary Twitter suspension, Libs of TikTok reiterates vow to sue if the social media giant ever issues permanent suspension
‘We got to do what we got to do’: Journalist uses condom to protect microphone during Hurricane Ian broadcast