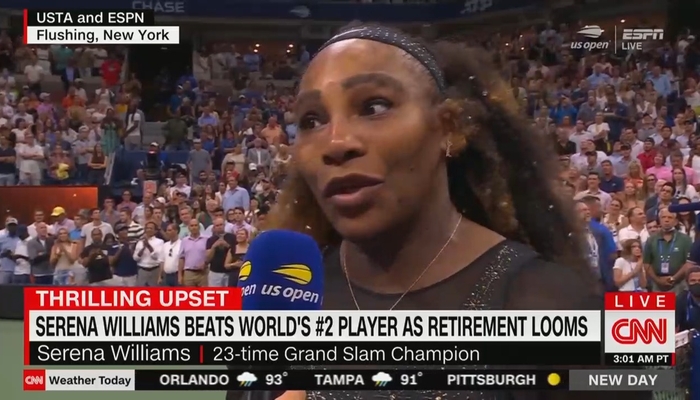 The opening segment of CNN’s New Day on Thursday morning was one, long, embrace of Serena Williams. It came after Williams defeated world #2 Anett Kontaveit on Wednesday night at the US Open.

Serena certainly deserves accolades. As her playing career ended Friday night, there’s a good case to be made that she is the greatest female player of all time.

“What Brianna [Keilar] said at the top, the longevity piece, is so important. Because she is in the pantheon of all-time greats. But she has outlasted Michael Jordan and Tom Brady.”

Serena is retiring at age 40. Tom Brady is 45, and is about to begin his 22nd season in the NFL, playing as the starting QB of the Tampa Bay Buccaneers. Very strong 300-pounders will be looking to pound him into the turf—something that rarely occurs on a tennis court.

CNN also focused on Serena saying in her post-match interview that throughout her career, she has been playing with “an X on my back.” 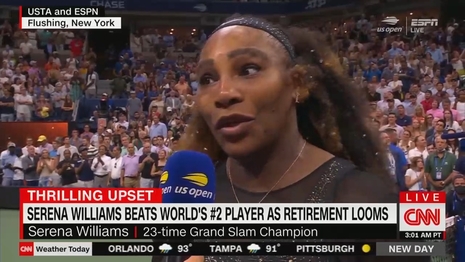 No doubt that certain pressures come with being #1. But Serena has also enjoyed incredible fame, celebrity, and fortune. Witness the adoring crowd last night that, in CNN’s words, was “packed with celebrities” .

And let’s remember Serena’s reported net worth of $260 million. Guessing most people would gladly wear whatever letter on their back—in return for a quarter-billion-plus in the bank.

JOHN BERMAN: The stands were packed with celebrities as they always are. Tiger Woods, he was right there. Serena Williams says she is still playing because of him. He helped her find clarity, she says. Beyond that this is what she said after the match.

And, honestly, I never get to play like this since ’98 really, literally. I’ve had an X on my back since ’99. So it’s kind of fun, and I really enjoy just coming out and enjoying it, and it’s been a long time since I’ve been able to do that.

CAROLYN MANNO: What Brianna said at the top, the longevity piece, is so important. Because she is in the pantheon of all-time greats. But has outlasted Michael Jordan and Tom Brady. I mean, she started as a teenager and now she’s 40 years old. But that soundbite that you just heard from there, that’s the key to the whole game.

She said she hasn’t played, hasn’t been able to play like this in two decades because there’s always been an X on her back.

CHRISTINA BRENNAN: You know, I’ve covered her, the length of her career, I was there in ’99 when 17-year-old Serena Williams won that first U.S. Open, her first grand slam title. And I hadn’t thought of that. When she said that, Brianna, when she talked about the pressure, always a target on her back, to think that that’s what she’s been living with as she’s won 23 grand slam titles and has become the greatest player in the world, most competitive time in the history of women’s tennis and dominating for these couple decades. That took me by surprise when I heard her say that. And as I said, I’ve been around her for years.

So, there’s things we’re learning about her. We’re getting inside of her mind, her psyche. When you’re 40, almost 41, you’re comfortable in your skin, although I think Serena has been comfortable in her skin for a long time and such a role model for working moms and women in sports and black women and on and on it goes.

But now, we’re really hearing some things that we otherwise wouldn’t have. Thank goodness she’s playing, thank goodness that she is out there talking to us, we’re learning things about one of the greatest of all times. Surprised me, and that’s why I think she can go deep into this tournament. Because she is just loving this.