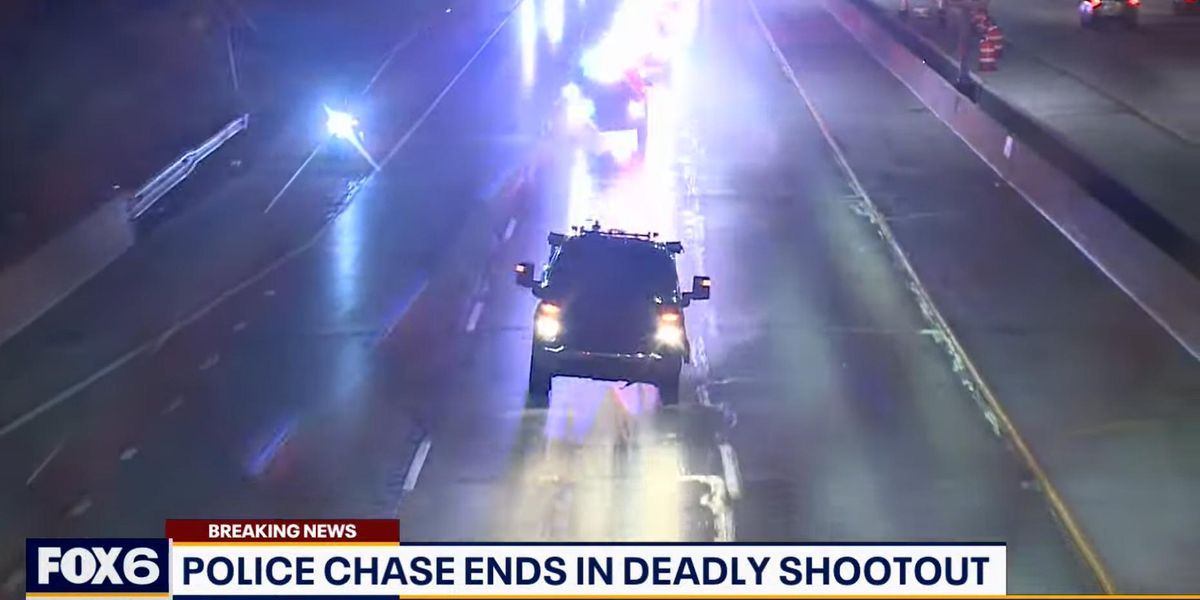 Around 11 p.m. on September 2, a truck came to a stop, paralyzed after a failed attempt by its driver to evade police. The three-mile chase through Milwaukee’s downtown had reduced at least one of the vehicle’s tires to its rims. Ernest Tyrell Blakney, 47, convicted of sexually assaulting a child on August 15, was behind the wheel. He had been on the run for over a week after allegedly killing his ex-girlfriend and torching her house.

Blakney allegedly exited the vehicle and immediately opened fire on police officers. Eight officers with 37 years of experience between them responded, terminating the threat.

In the shootout, a 22-year-old bystander from Hudson, Wisconsin, was struck by an errant bullet. It is presently unclear who fired that shot. She was taken to a hospital and treated for non-life-threatening wounds.

According to the Milwaukee Police Department, the officers involved in bringing the mayhem to an end have been placed on administrative duty.

u201cMORE DRAMATIC VIDEO: The end of a Milwaukee police pursuit and police shooting of a homicide suspect on Water Street was captured on cellphone by Jacob Hill. MORE: https://t.co/Gm8uz3zkOzu201d

WITI-TV reported that in 2020, Blakney was charged with second-degree sexual assault for having had sex with a child. He was released in 2021 after posting $5,000 cash bail. He ultimately pled guilty and was convicted on August 15. On October 20, he was supposed to stand for sentencing.

Despite Blakney’s August 15 conviction and requests from both prosecutor Sam Tufford and the victim’s family that he be placed in jail, Milwaukee County Circuit Court Judge David Borowski cut the convicted felon loose.

u201cJUST IN from @NickBohrWISN – the transcript detailing a judges decision to not jail a man after he pleaded guilty to raping a 13-year-old. 10 days after the decision, the man, Ernest Terrell Blakney, is accused of killing his ex. Here is the judges reasoning @WISN12Newsu201d

On August 25, Blakney allegedly murdered his ex-girlfriend, 36-year-old Nikia Rogers. He is said to then have set her body and the house in which it lay on fire.

Around 4:30 a.m., the MPD and firefighters were called to the house, which was enveloped in flames. After putting out the fire, first responders found Rogers’ body on the second floor.

An autopsy later confirmed that she had been shot twice, once in the head and a second time in the back. Her burned body also showed signs of having been set ablaze with the use of an accelerant, such as that found in the container of lighter fluid discovered by police near her body.

Although Rogers allegedly lived with Blakney, she had become “reacquainted” with another man. That man told investigators that on the night of the fire, he received a message from Rogers’ home phone: “You should have left her alone … She dead.”

Using information provided by a number of witnesses — one of whom claimed to have seen a blood-soused Blakney armed with a gun and another who said the suspect indicated he would burn his tractor-trailers — police searched a wooded area nearby the torched house. There they found Rogers’ SUV abandoned in a field.

Blakney had, however, found a new set of wheels.

According to a criminal complaint, Blakney had come across a man (identified as KMG) repairing a bulldozer at a construction site, not far from where he had abandoned Rogers’ car. Brandishing his firearm, Blakney allegedly stole KMG’s car keys and forced him inside a trailer.

After locking KMG in the trailer, Blakney is said to have stolen KMG’s truck.

Blakney remained at large for over a week and faced the following charges:

At 10:50 p.m. on September 2, police identified the stolen vehicle. They attempted a traffic stop, and when Blakney allegedly refused to stop, officers gave chase.

Blakney died of his injuries.