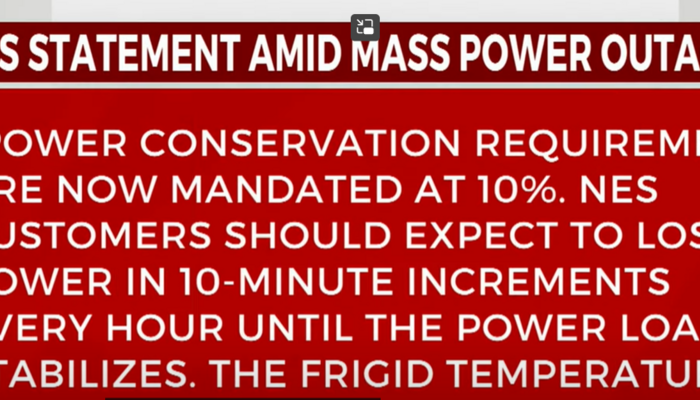 Tennessee froze during rolling electrical blackouts Sunday, but the NFL’s Titans were allowed full power usage for their home game against Houston. Many of those residents left out in the cold during a cold Christmas day were understandably hot under the collar about the Tennessee Valley Authority (TVA) for allowing a billion-dollar enterprise to power up.

Sunday temperatures in Nashville ranged from 16-30. The cold air strained the TVA’s power grid, prompting it to implement rolling blackouts in Memphis and Nashville. The Nashville Electric System (NES) mandated reductions in power consumption. More than a million residents in those two cities were pressured to limit their electric consumption while millionaires were playing a kids’ game.

There were also periods of time when residents had no power at all to keep themselves warm on a frigid winter day.

But the all-powerful NFL team was given full authority to tap into mega-wattage for the game at Nissan Stadium. The masses huddled for warmth just so 66,634 people could buy tickets to a sports event.

Nashville Mayor John Cooper asked the NFL to postpone Sunday’s game, but what the NFL wants, the NFL gets. “I’ve been informed that TVA’s unilateral rolling blackouts will continue,” Cooper said. “All non-essential businesses should reduce power usage. I’ve asked the Titans to postpone their noon game in solidarity with our neighbors. TVA needs to invest in infrastructure to withstand extreme temp.”

The game was scheduled for Saturday, but was moved to Sunday, which did nothing to alleviate the power crisis.

Residents left in the cold heated up the Twittersphere to register their anger over TVA’s preference for the NFL team at their expense.:

One person tweeted it was appalling that citizens had to sacrifice their health and safety and demanded the Titans cancel the game.

Another person tweeted the Titans were playing people like a fiddle.

There was also a political twist to the controversy according to another social media post: “Four Biden appointees just confirmed and appointed to the TVA. Rolling blackouts in 7 states. What a coincidence.”

The Twittersphere got real hot in Tennessee Sunday.

This incident is a really bad look for Tennessee and the NFL, which plan to force the chilled peasants to fork over more than $1 billion to build the Titans a new stadium. The high and mighty got some serious ‘splainin’ to do.