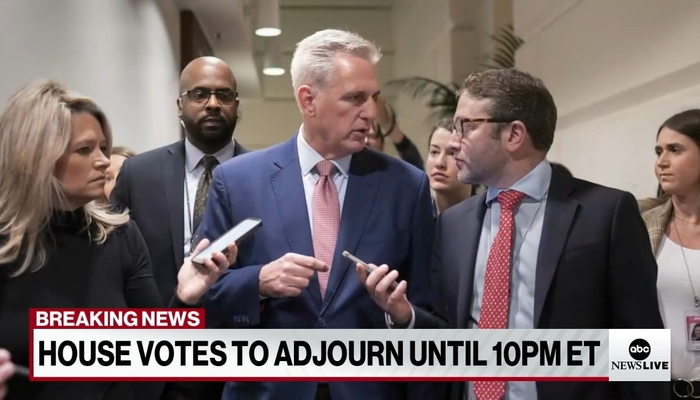 So the media template of the GOP Speakers fight is – shocking I know – the same old, same old.

The template is as simple as it is ancient. Reasonable Republican X is in a huge fight with those mean, nasty far right crazy wing nuts.

Remove the name “Kevin McCarthy” and those of the 20 or so conservatives who have been holding up his election and substitute the following:

There are more names one could use – although Donald Trump’s nomination battle broke with the pattern as the media took awhile to cast him as the big, bad conservative.

What is the pattern? It holds that regardless of the year or the circumstance, Republicans fall into two camps: The Reasonables vs. The Far Right Wing Nuts and Crazies.

In the current fight to be the next Republican Speaker of the House, like clockwork the media pattern has kicked in. House Republican Leader McCarthy is The Reasonable guy, his opponents The Far Right Wing Nuts and Crazies.

The Speaker situation will resolve itself one way or another, and may have by the time you read this. There’s no possibility the House will be Speaker-less for two years.

But the question here is when and how – if ever – this media pattern will ever change. What is always left out in the media stories is that every battle for a presidential or other nomination (like the Speakers fight) is sui generis - unique. McCarthy is not Dewey or Rockefeller or whomever. He’s McCarthy. His opponents are not Reagan or Goldwater or Taft. They are their unique selves.

What the media are utterly unwilling to do is treat these battles as respectful and normal differences on anything from the issues of the moment to an overarching political philosophy. That these differences are decidedly human and normal is never in the media equation.

Example? In 1964, as he was on the verge of being nominated for president at that year’s Republican National Convention, CBS and the New York Times ran with a story that said the following.

After Goldwater claimed his nomination with his acceptance speech at the convention, he was going to take a vacation. Where? The story reported that Goldwater was heading to Europe – Germany specifically. And the purpose of his trip was to unwind by meeting a right-wing (far right wing of course) group before chilling out with a visit to – no kidding – Berchtesgaden. Yes, that would be the self-same Berchtesgaden that is home to the “Eagles Nest” -Adolph Hitler’s famous country estate. No implication there, right?

The media problem? There was utterly no truth to the story whatsoever. At the end of the convention Goldwater was headed to – shockingly not – his home in Arizona.

Both CBS and The Times had to retract the story. Goldwater made clear in his memoirs that he never forgave them.

But retraction or not, the real question here is why in the world two “mainstream media” outlets went in that direction in the first place. The answer is as obvious now as it was not so obvious in 1964.

Which is to say the “mainstream” media aren’t- and wasn’t “mainstream”-  then or now. Any time there is an intramural skirmish in Republican ranks the media story line is instinctive. The perceived “moderates” are the good guys, and the conservatives of the moment in opposition are the bad guys.

Thus the media casting of the opponents of a McCarthy Speakership are the latest version of  The Far Right Wing Nuts and Crazies. This never, say again never, changes.

The best response to this ongoing problem for conservatives is what, in fact, has taken place. There was the birth of conservative magazines, books and eventually Rush Limbaugh and the evolution of first, conservative talk radio and then Fox News, the latter now joined by NewsMax and One America News. And in today’s Internet world this very NewsBusters site that you are reading established by the Media Research Center. Social media is now a universe – a universe  filled with conservative media stars, publications, websites and now podcasts.

Yet for all of this, it is still true that the media treatment of Republicans has not, and likely will not, change. It is on full display in the media coverage of the Speaker’s fight.

And it is very safe to say that whether the next Speaker is Kevin McCarthy or any other Republican, he will spend his Speakership being cast as the crazy bad guy.

Take it to the bank.