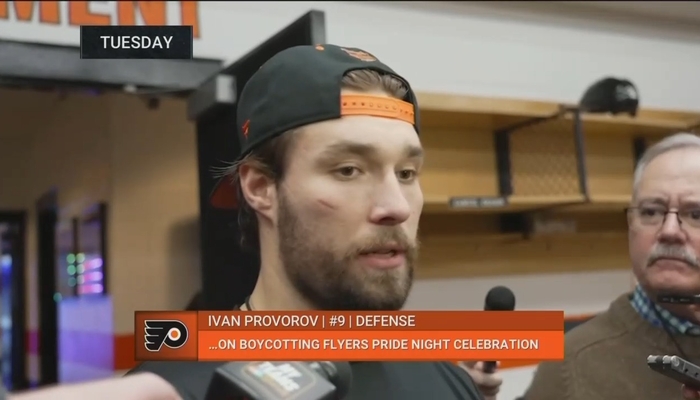 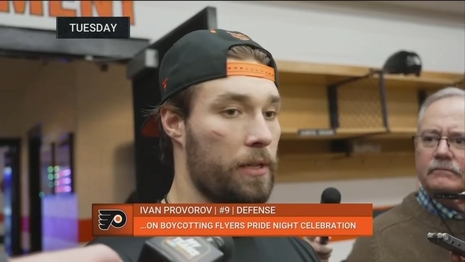 The “progressives” really cannot tolerate dissent, and especially when it comes to their LGBTQ ideology. Expressing solidarity with “Gay Pride” is not optional. Athletes who refuse to share in the solidarity should be punished, and teams that won’t punish them should be fined.

On January 17, Philadelphia Flyers defenseman Ivan Provorov infuriated sports journalists when he refused to wear a rainbow jersey for warm-ups during “Pride Night,” citing his Russian Orthodox faith. “I respect everybody and I respect everybody’s choices. My choice is to stay true to myself and my religion.”

On the NHL Network, analyst E. J. Hradek trashed Provorov, who moved from Russia to Pennsylvania when he was 13, saying he should go back to Russia and fight in Ukraine. “Ivan Provorov can get on a plane any day he wants and go back to a place where he feels more comfortable, take less money and get on with his life that way if it’s that problematic for him,” he said. “If it bothers you that much, there’s always a chance to leave, go back to where you feel more comfortable — I understand there’s a conflict of sorts going on over there, maybe get involved.”

For their part, the Flyers didn’t punish Provorov, but offered their usual corporate expressions of support for LGBTQ “pride.”

“The Flyers should have responded by not allowing him to play in the game,” tweeted NHL announcer Gord Miller with the Canadian network TSN. “Freedom of expression doesn’t give you freedom from the consequences of your words or actions.” Punishment is essential to the Left.

“He’s a shameful human being whose homophobia is only going to get more shameful over the years,” Adam Proteau of The Hockey News proclaimed. He compared Provorov’s action to racism or anti-Semitism, and then boasted, “I’m going to keep on keepin’ on, and all the wonderful people on the right side of history should do the same. Don’t ever let vicious opposition intimidate you.”

Journalists should know that sometimes, religious people are trying to put themselves on the right side of God, not the so-called “right side of history.”

The gold medal for intolerance of Christians in this competition goes to Canadian “Breakfast Television” commentator Sid Seixeiro, who demanded the NHL fine the Flyers one million dollars for allowing Provorov to skip wearing the jersey. He underlined “I’m not kidding!”

Thought experiment for @Sid_Seixeiro: since “Hockey is for everyone”, let’s have a Christian appreciation night. Every NHL player & employee MUST wear a cross on their uniforms. Anyone who won’t will be deemed Christophobic, full of hate, canceled & fined a million $. Deal? pic.twitter.com/sstdc46ZNm

He added that religious people are typically hypocrites who lead disgusting lives. “One last point! Nothing scares me more than any human being who says ‘I’m not doing this because of my religious beliefs,’ he said. “Because when you look at people’s lives who normally say that publicly you’d throw up at what you saw. You’d throw up at what you saw! I’ve seen that a million times in a lot of different ways, so don’t give me that…don’t feed me the religious beliefs line.”

In other words, Sid won’t tolerate a religious-beliefs excuse for anything, because he thinks religion is bunk. His critics on Twitter are asking “Why do their beliefs trump my beliefs?” The Left thinks that you should never tolerate two sides of any political view like they’re equally valid. Their views must be the ones that everyone must celebrate, or face negative consequences.