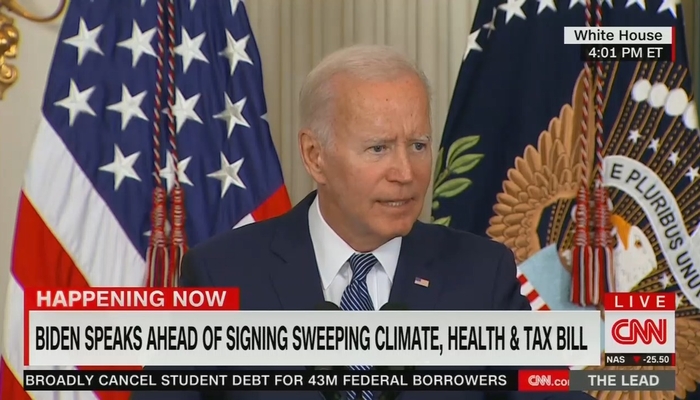 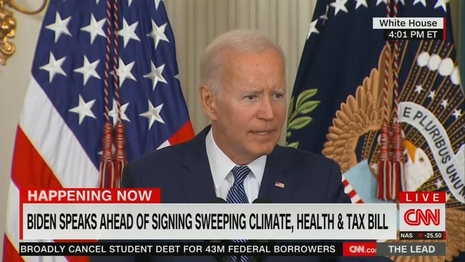 Anyone who reads or watches the badly named “mainstream media” knows it carries all the echoes of a Democratic Party messaging service. It’s so efficient that it goads itself into providing happy news for Joe Biden.

For example, CNN media reporter Brian Stelter tweeted “Congress is passing major, and often bipartisan, bills. Biden is following through. Is the news getting out?” Gee, is the pro-Biden media putting out the pro-Biden messaging? Of course.

Stelter linked to New York Times editorial board member Farah Stockman, who insisted “Regardless of what plays now on cable news, historians of Mr. Biden’s first term will have to admit that a surprising amount got done.”

If there’s anyone more reliably liberal than the reporters, it’s the historians.

Time magazine proclaimed “Biden’s ‘bland leadership’ may be getting results.” Washington Post analyst Dan Balz gushed “Biden gets a big victory and Democrats get some November talking points.” The Post is all about Democrat talking points.

In his daily morning newsletter, New York Times senior writer David Leonhardt announced “Biden is the second straight Democratic president to shepherd a big agenda through Congress. During the first of those two presidencies, of course, Biden was the vice president, and he helped manage congressional relations.”

Biden’s been great in the White House – twice!

As Biden prepared to sign the “Inflation Reduction Act” – a law as badly titled as “mainstream media” – ABC’s Good Morning America put the gush into heavy rotation. Guest co-host Gio Benitez touted “a big victory at the White House. President Biden is set to sign the massive health, climate and tax bill into law later today. Now this is the largest climate investment in U.S. history.”

White House reporter Cecilia Vega repeated “such a big win for President Biden.” On screen, the message was “President Biden’s Big Victory: Set to Sign Inflation Reduction Act Into Law.” There were no quotation marks around the bill’s title – because it’s Democratic Party messaging.

Benitez wrapped it up with a bow: “The President and cabinet members going across the country trying to convince the American people that this is helping them.” ABC’s is certainly helping with the people-convincing. We’re in a sprint toward Labor Day, and the liberal journalists are already aggressively trying to prevent a “red wave” for Republicans in the fall.

All these badly disguised Democrats are mistaking the passage of legislation with the unalloyed good of the country. “The largest climate investment in history” sounds a lot like the major boost the Obama administration tried to give to “alternative energy” in his first term. Does anyone remember that?

What if the “Inflation Reduction Act” spending spurs more inflation? If it does, the ABC types won’t be connecting that bad news with the Democrats.

How can we know? Check out the coverage of the one-year anniversary of Biden’s disastrous pullout from Afghanistan. ABC did an entire report on the anniversary without using the name “Biden” in it. Ben Shapiro pointed out that anniversary stories from NPR and The New York Times also skipped any mention of the name “Biden.”

If you were to gamble on what spin a network like ABC would use on Biden stories, you would not put your hard-earned money on “fair and balanced.” You’d put your cash bet on “this news story is going to sound so much like an advertisement you’ll be looking for the insurance-selling emu wearing sunglasses.”

Am I The Only One Who Remembers When Dictionaries Were the Authority on Words?
Can Jordan Peterson be TRUSTED?
CROWDER breaks down why Russians seemingly turned on Putin
Rep. Marjorie Taylor Greene’s Husband Files for Divorce, But Praises Her for Being an Amazing Mom
Inflation under Biden, Democrats costing Americans more than $11,000 a year per household