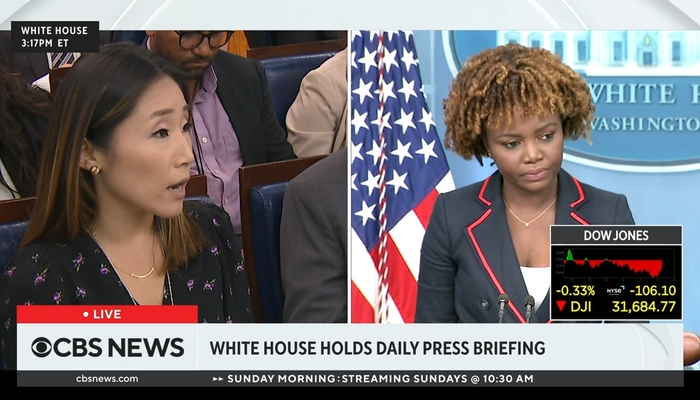 White House Press Secretary Karine Jean-Pierre laid the groundwork, telling the AP’s Chris Megerian that Biden believes half the country poses “an extremist threat to democracy,” “freedoms,” and “rights.” This left Reuters’s Jeff Mason to commence the softballs, asking whether Biden and his administration are “satisfied that FBI agents are getting the protection that they need as a result of these threats” by Republicans.

CNN’s M.J. Lee was perhaps the most embarrassing, starting with her question lobbying Biden to have calls with Republicans to dress them down:

He was obviously also very clear that any threats, attacks on the FBI, law enforcement agents…were not acceptable…I’m just wondering if the President would be open to having direct conversations with some senior lawmakers…to tell them to cut it out?

Jean-Pierre largely ducked that prospect, so Lee tried again: “[I]f he believes this rhetoric is potentially harmful or dangerous to law enforcement, you know, does he feel he has a responsibility to do everything you can?”

[Y]ou all have billed this as being related to the battle for the soul of America…The threats to democracy that he obviously, saw…does he believe those forces are still at large now or does he believe that there is some progress since he came into office?

At the back end of the briefing, CNBC’s Kayla Tausche came off like what our Twitter account called “a spiritual guru” for the White House instead of a journalist: “On the speech tomorrow, President Biden said…he sought this office to restore the soul of the nation. So, where does the White House believe the country is in that restoration process?”

JEAN-PIERRE: Because he thinks our democracy’s at risk. Because, I mean, you know, when you talk about taking away our freedom, June 24, the decision from the Supreme Court justice on the Dobbs decision, that was a decision to take away our constitutional right. That was an important — important moment for our country. It put women’s lives at risk and it’s not just, you know, reproductive rights. It’s going to be other rights as well as we heard from Supreme Court Justice Thomas. He made that very, very clear and then after that, we heard from leaders of the Republican Party saying they wanted a national ban. So, we have seen recent efforts to take away our rights as Americans from an extreme — again — an extreme part — of their party. Those MAGA Republicans that you’ll continue to hear us talk about and so that is continuing and it hasn’t stopped. And I just listed out what recently — what recently leadership leaders in Congress have said, about attacking law enforcement individuals who are protect us [sic], you know, attacking their own colleagues from the other side of the aisle. That’s dangerous. Again, the President’s not going to shy away from speaking up, from speaking out, and he is — it is very important for him to speak directly to the American people as I have said and this is kind of goes into Phil’s question. He believes a majority of Americans want to protect our democracy. He believes majority of Americans wants [sic] to protect our to protect our freedom. That’s where he believes the majority of the country is, but we have to keep talking about it. We cannot shy away from it.

ORDOÑEZ: Can you talk about — give any color of how he’s preparing for the speech? I mean, the guide in the schedule today seemed not so full. I mean, is he spending much of his day, you know, going through drafts with staff? Is he practicing it? What kind of — what’s kind of the process, if you don’t mind?

Shifting gears to actual questions, CBS’s Nancy Cordes noted that Biden “ran as a uniter and now he’s calling MAGA Republicans, which is a very large swath of the American populace, semi-fascists” who are “a threat to democracy.”

“Does the White House believe this is a fair criticism by Republicans, that this is not unifying language,” she added.

Jean-Pierre denied it, encouraging Cordes to consult the work of “historians” and “many of your colleagues” who’ve called out “this dangerous trend that we’re seeing.”

Real Clear Politics’s Philip Wegmann respectfully pushed back on this insanity, twice asking whether Biden’s talking about such a large swath of the country: “When it comes to voters, how does the President differentiate between the ultra-MAGA folks who he sees an extremist threat to democracy and the average GOP voter?”

Jean-Pierre insisted their problem is with “the MAGA Republicans in leadership,” but she changed her tune and broadened it out to “an extreme part of…the party” after he asked a follow-up: “So, for folks sitting at home, when the President is talking about preserving the soul of the nation and those threats to democracy, he’s not referring to those individuals. He’s talking about Republican leadership?”

Doocy took things in a different direction on Overdose Awareness Day: “There’s a big problem now that rainbow fentanyl, which is designed to target children, has been found in 18 states. What specifically is the President doing about this?”

Jean-Pierre insisted that, along with “observing” that day, she argued the Department of Homeland Security (DHS) will spend $80 million on “drug prevention.”

Obviously, this didn’t fly with Doocy: “But 300 over doses a day now. We know how the fentanyl is coming into the country. It’s coming right across the southern border. The DEA administrator says so. So, when is the President going to do something more to stop this?”

Jean-Pierre boasted that it’s being addressed since there’s been “a 200 percent increase of fentanyl seizures,” but Doocy cut through with this devastating reality: “[L]ife expectancies are going down at a rate not seen in a century and part of that is being driven by drug overdoses, so what is the President going to do to stop this?”

Things got even worse after Jean-Pierre falsely claimed the Biden administration has been “securing the border” and giving “record levels of funding” to “DHS, so they can stop illicit drugs.”

The usually aggressive but even-keeled Doocy seemed to have had enough. Pathetically, Jean-Pierre argued it was offensive for Doocy to argue the administration wasn’t addressing this crisis (click “expand”):

DOOCY: It’s not being stopped. 300 overdoses. This is being designed to target children.

DOOCY: — want to kill American kids. What is the President doing about it?

JEAN-PIERRE: I hear you. I just — I just laid out 200 percent of increase of drug fentanyl seizures. That is a dangerous drug that we are taking off the street. We are going to continue to focus This is an important, important priority for this President. And I just want to talk about how you’re saying that there — you know, there just — the border — right — and how the border — whatever you just stated — just want to clear this up. Migrants who —

JEAN-PIERRE: — hold on. So, migrant — migrants, who attempted to enter the country illegal — legally are taken into custody by Border Patrol agents. That is how it works. That is the process that we are taking. They are then either expelled, by the court order under of Title 42, transferred to ICE. Custody, or monitored through alternatives to detention program as they await further processing. We have made 3,000 arrests in the first three months of launching an aggressive campaign to combat the multi-billion dollar human smuggling industry….This is something that’s incredibly important to this President, so to say that we’re not doing enough Peter, is just falsely categorically wrong, especially on a day that we are observing what needs to be done and — and we have announced — DHS has announced $80 million to prevent that, so we are doing the work. And here’s the thing, Peter, if — look. If Republicans want to help us, stop overdose and stop our kids getting overdose because of these dangerous drugs, because of these fentanyl that we’re seeing in the streets, we’re happy to work with them, but they’re not.

To see the relevant transcript from August 31’s briefing (including questions from FBN’s Edward Lawrence on the ineffectiveness of Russian sanctions, Bloomberg’s Jennifer Jacobs on the ethics of Tuesday’s Pennsylvania rally masquerading as a White House event, and CBS’s Kathryn Watson on whether Biden ever mishandled classified information), click here.