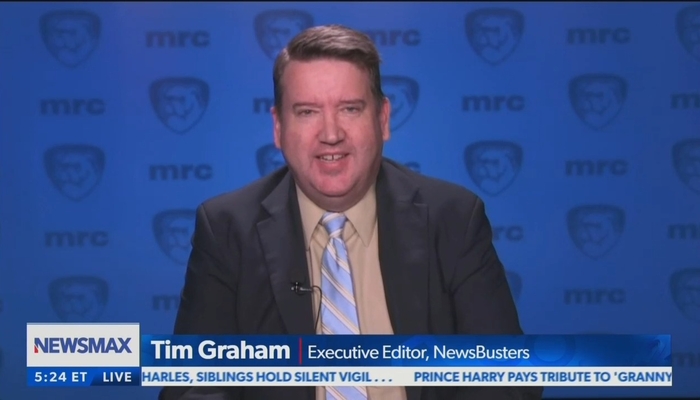 On Monday’s Spicer & Co. on Newsmax, NewsBusters executive editor Tim Graham took on Chuck Todd’s softball questions for Vice President Kamala Harris on NBC’s Meet the Press. Todd lamely asked Harris if the border was secure, as if everyone doesn’t know the answer, and didn’t in any way find the Democrats were extreme on abortion.

Co-host Lyndsay Keith was amazed that Harris would try to claim the border was secure, but “Do we expect her to say it wasn’t?”

TIM GRAHAM: It’s a terrible answer to a very lame question. I mean, Chuck Todd actually asked her just simply is the border secure, which is sort of like asking ‘is the grass blue now?’ You know, everybody knows the border is not secure. Anybody who certainly is a news person who’s in charge of facts knows the border is not secure. So why is he asking that question? Of course. Yes, she’s going to try to give some lame answer like it’s Trump’s fault. It all fell apart under Trump! Well, they’ve been in charge for almost two years now. They haven’t fixed it. No, it got way worse under Biden. I think everybody knows that. Anybody who’s looking at the actual numbers knows it exploded under Biden. They are the ones that own the border crisis, and she was the one they assigned to be in charge of this mess, and Chuck Todd’s basically saying oh, isn’t it unfair? They charge you these tough issues.

Benjamin Weingarten of The Federalist was shown footage of Harris insisting she wouldn’t dare to tell anyone how to run their campaigns (as in Democrats cynically boosting MAGA Republicans), and she wouldn’t dare tell prosecutors (in Biden’s Justice Department) how to investigate Trump. Weingarten underlined how once again, Harris somehow showed up and sounded inarticulate and unprepared for softball questions from Todd. “It’s cringeworthy to watch.”

Then came Todd’s question to Kamala if there should be any limits on abortion. Of course, she implied no. Tim replied:

GRAHAM: This is where the Democrats turn into ‘Oh, the government should do nothing. The government shouldn’t intervene anywhere when it comes to killing a baby. Up till month nine. Maybe month 10. Oh, it’s a woman’s right to choose, you know, and it really is funny because these same reporters will run around and say ‘the Republicans are extremists.’ Well, this is an extremist position. It just happens to be the media position. But that’s an extreme position. There’s the one extreme that said abortion[s] should all be illegal. And there’s the opposite extreme that abortion should always be legal, and the woman always has a right to kill at any time. That’s the media position, so it’s okay.