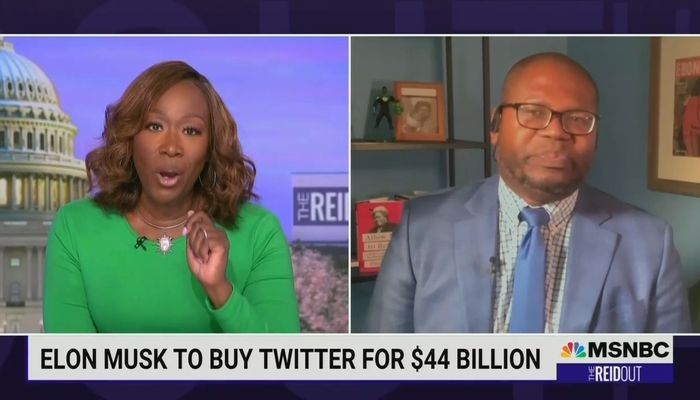 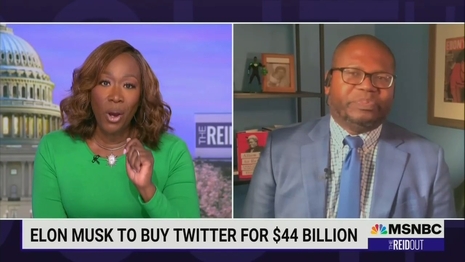 Today we present the WORST OF 2022: The Joy of Hate Award for Joy Reid Rants.

“There was a time when people had the double hashtags around their names because they were Jewish and right-wingers were saying ‘get in the oven’ any time you made any benign comment on Twitter. They attacked women. You know, the misogyny was crazy on Twitter for a while. Elon Musk, I guess he — you know — misses the old South Africa in the ’80s. He wants that back.”
— Host Joy Reid on MSNBC’s The ReidOut, April 26.

“The junior Don [Florida Governor Ron DeSantis] has also taken upon himself to meddle in the state’s congressional redistricting process, submitting his own map which — you guessed it — dilutes the voting power of people of color, cutting in half the number of majority African American districts, splitting up Hispanic voters in South Florida districts, and giving Republicans an eight-seat advantage. I guess when President Biden spoke of whether Republicans wanted to be Bull Connor, DeSantis was at home raising his hand, ‘Me, me, I want to be Bull Connor!’”
— Host Joy Reid on MSNBC’s The ReidOut, January 18.

“They’re claiming that they are the defenders of the integrity of childhood. They’re going to go after child pornography and rape. And they’re going to defend the integrity of childhood. [Supreme Court Justice] Brett Kavanaugh was accused, credibly, of rape and the victims were teenage girls and college students. High school and college students! So Josh Hawley, and [Republican Senator] Ted Cruz and Lindsey Graham and all the rest of you, and [Republican Senator] Mike Lee, and Tom ‘thuggish’ Cotton. You didn’t defend teenage victims of the man you gleefully put in a lifetime position on the Supreme Court. You don’t get to say anything about Judge Ketanji Brown Jackson. She bested you intellectually and you’re mad about it. Stay mad!”
— Host Joy Reid on MSNBC’s The ReidOut, March 22.

“Please stop thinking that there is some body count, some level of brutality and carnage that will move them — these Republicans and their two pet Democrats. That the rivers of blood will one day run deep enough and the slaughters tragic enough that these politicians will say, ‘Okay, that’s enough. Let’s do something.’ Because their tolerance for blood and the NRA’s tolerance for slaughter are bottomless, as is the grief and the torture that the parents of slaughtered children and slaughtered grandmas and shoppers and bible study parishioners, all the slaughtered Americans will feel every day for the rest of their lives. So honestly, to hell with anybody who says ‘don’t politicize this,’ because these deaths, until we change, until we stop letting this minority of ghouls rule us, this is who we are.”
— Host Joy Reid on MSNBC’s The ReidOut, May 25.

“Welp. The Christianist majority on the SCOTUS has made it clear that they intend to return this county to its 18th century state and they are accomplishing their goal. We will now have free states for women, and states where women are returned to their 1700s status as property. LGBTQ people in Gilead states will live in fear and silence. They’ll be afraid to work as teachers. And red state teachers will be afraid to tell the truth about U.S. history lest they stray from the white nationalist line. And of course there will be lots and lots of guns, and no separation of Christian* church and state (other religions are out of luck.) We have raced backwards, against the tide of history. The Republican Party did this. Gilead states are doing this. It’s time to wake up, y’all.”
— June 24 tweet by MSNBC’s The ReidOut host Joy Reid.

“It’s also important to unpack the myth of Thanksgiving. It is a holiday riddled with historical inaccuracies. Built on this myth that the indigenous welcomed their colonizers with open arms and ears of corn. A simplistic fairytale interpretation of a 1621 encounter between indigenous tribes and English settlers that erases the genocide that followed. It’s the truth that Republicans want banned from our textbooks because here is the secret they want so desperately to keep. We are a country founded on violence.”
— Host Joy Reid on MSNBC’s The ReidOut, November 23.

No more sales tax on baby necessities, pet meds, gas stoves in Florida under new DeSantis proposal
Teen cowboy dead after bull ride at rodeo: ‘He was loving every second of it’
Glenn: Pfizer employee has VIOLENT meltdown, hinting at HUGE pharma secrets
It’s Beginning to Look a Lot Like World War III
CRIMINAL: JJ tried to create a new subsidiary to take all the liability from talc powder damage lawsuits, then declare bankruptcy to dismiss BILLIONS of dollars in trial awards