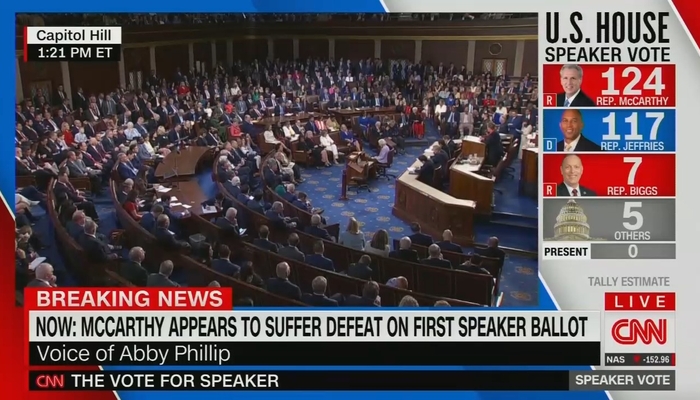 Is Chris Licht interested in changing CNN or is he asleep at the wheel? Such was the case on Tuesday, during the coverage of the vote for speaker of the 118th Congress when it felt as though old puppetmaster Jeff Zucker were still in the control room, as so-called journalists smeared Republicans and wondered if voters actually want Congress to do anything about Hunter Biden’s life of corruption.

After State of the Union co-host Dana Bash lamented how Congress has been held hostage for “12, 15 years” by a “small band of extremes” in the GOP, her fellow co-host and The Lead host Jake Tapper tossed to outgoing Congressman Rodney Davis (R-IL) by similarly bemoaning the “ultra-right-wing, MAGA group…is, by the way, in some analyses, the reason why there wasn’t a red wave.”

Davis made a more general point about how “candidate quality matters” and has been an issue for multiple cycles, but then pivoted to insisting that, by holding up a Kevin McCarthy speakership, they’d put at risk their promises to voters “to hold Hunter Biden and Joe Biden accountable.”

Tapper snidely dismissed this: “You think that voters sent the Republican majority to the House of Representatives to hold Hunter Biden accountable?”

Earth to Jake, would that be the case to spend years talking about the Oath Keepers or Trump’s tax returns or Stormy Daniels?

Davis didn’t go along, saying that’s “absolutely” what some GOP-won districts want, but others were Biden districts and it’s more complicated.

Instead of acknowledging that investigations of the Biden family’s foreign business operations are only one part of what Republicans of all stripes ran on (along with, among other topics, Afghanistan oversight, China, inflation, and taxes), Tapper constructed a strawman:

I mean, maybe it’s true that there are a lot of voters out there who are in these 11 districts who think that the business of Congress is to investigate Hunter Biden. But I don’t know that that’s a winning formula for House Republican.

Sunday Inside Politics host Abby Phillip concurred by claiming she hasn’t seen “any evidence that, especially these members who are part of the Never Kevin caucus or what have you, really took away that message from the last election because they’re in districts where that wasn’t a factor.”

Former CNN+ host Kasie Hunt made the case for her party to stay in power, saying later that this was proof “Republicans are not capable of governing” and this was far worse compared to Obama-era fighting over the debt ceiling.

She continued with this theme that Tuesday showed “Republicans are not in a place right now where they are capable of governing the country” and instead in “poor condition.”

KING: And Jim Jordan knows as well as anybody, he may be a member sometimes, an unruly member of that herd, he knows what it’s like — the chaos in the House. So, do you want to manage that? Do you really want that number one job because of the responsibilities that come with it or do you want to be the bulldozer going after Hunter Biden, going after Joe Biden, going after cabinet members, trying to impeach them. So, I think this does conflict Jim Jordan. Is he ambitious? Does he want power? Absolutely. Does he — has his dream always been to be bulldozer in chief investigator? Yes. So, the question is a lot of them are going to have to look in the mirror. There are six or eight potentials. Jamie smartly mentioned the more centrist Republicans, the more pragmatic, governing conservatives. They don’t want Jordan as their speaker.

HUNT: Someone is going to have to tell him.

KING: Some grown up is going to step up at some point and say, somebody has to get to 218 or why don’t you just elect Hakeem Jeffries Speaker and say we Republicans can’t govern period.

Also in that hour, Hunt bemoaned to the panel that, unlike Democrats, Republicans care more about “appearing on right-wing radio” than “about governing” which they “don’t care” to ever do.

Phillip obviously agreed: “[T]here is a huge portion of the Republican base that is not interested in any way, shape or form in anything that’s happening in Washington. The whole point is to rabble rouse…. stick it to the other side…throw out red meat[.]”

This hatred toward conservatives was made possible thanks to the endorsement of advertisers such as CarShield and Progressive. Follow the links to see their contact information at the MRC’s Conservatives Fight Back page.

To see the relevant CNN transcript from January 3, click here.

Chip Roy DESTROYS Maxine Waters using HER OWN words
Hunter Biden Reportedly Used Delaware House Where Classified Documents Were Found As Home Office
Beetroot juice found to “significantly increase muscle force during exercise”
Watch a 5-year-old preacher go viral by baptizing his toys, singing with Grammy Award-winning singer: ‘You have lifted us all up’
It’s TOO LATE for NATO to win the war against Russia… here’s why