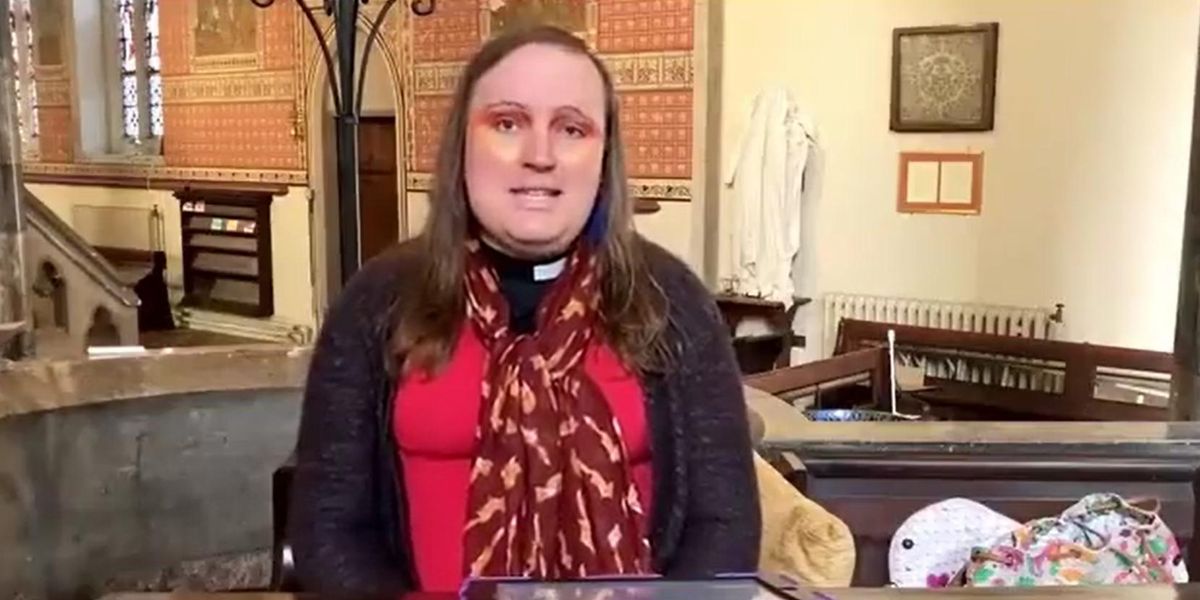 The Church of England’s first so-called non-binary priest has gone beyond accepting his newly manufactured identity by “going into schools, doing assemblies and making a huge difference in normalising it for children.”

A black conservative who was reportedly barred from the priesthood has suggested that this LGBT evangelization is tantamount to “grooming.”

Bingo Allison is a 36-year-old father of three and a priest ordained in the Church of England.

Allison told the Liverpool Echo that God guided him away from the two sexes delineated in the Book of Genesis, resulting in a schism between the “strongly religious” and conservative tradition he was raised in — which, he suggested, “Some might call … bigoted” — and a new “gender-queer” lifestyle.

Allison suggested that after encountering the term “gender-queer” seven years ago while completing his vicar training, “Everything suddenly clicked.”

“I didn’t know any trans people, and I think I probably met two gay people in my life,” said Allison. “So it was like another planet almost to me. There were a few times when I really questioned things. But because I didn’t really have the vocabulary to describe my experience, it just kind of didn’t go anywhere.”

With a newfound handle on the latest LGBT activist terminology, Allison claims to have revisited Genesis 1:27, in which the King James Bible and the English Standard Version both state, “So God created man in his own image, in the image of God created he him; male and female created he them.”

Allison said the language of “male and female” contra “men and women” struck a chord.

“It was a deepening spiritual experience, I properly felt God was guiding me into this new truth about myself,” he said.

Since mentally severing gender from sex, Allison has become an activist in his own right.

The Telegraph reported that Allison uses social media to spread the word of the LGBT movement.

In February 2020, Allison posted an image to Instagram in which he was wearing a purple hairband, eyeshadow, and make-up. The caption read, “Going to church because Jesus loves sparkly eyeshadow. #girlslikeus #transisbeautiful #nonbinary #eyeshadow.”

The Anglican priest’s LGBT evangelization is not limited to online engagements.

“When I’m wearing my collar it lets children know that is okay and that there is a place in church and the outside world for people like me,” he said.

Allison claims he has been involved with local secular LGBT youth groups, in which he seeks to “normalise” his identity.

Calvin Robinson, an Anglican trainee vicar who was reportedly barred from becoming a Church of England priest on account of his traditional views, has publicly taken issue with Allison’s LGBT ministry.

In response to the Liverpool Echo article about Allison, Robinson tweeted, “‘Gender-queer’ seems counter-Scriptural. ‘the first openly non-binary priest to be ordained in the CofE’ seems like vainglory. ‘The 36-year-old attends schools and assemblies … in the hope they can inspire others who find themselves in a similar situation’ seems like grooming.”

u201c@LivEchoLive u201cgender-queeru201d seems counter-Scriptural.nnu201cthe first openly non-binary priest to be ordained in the CofEu201d seems like vainglory.nnu201cThe 36-year-old attend schools and assemblies u2026 in the hope they can inspire others who find themselves in a similar situationu201d seems like grooming.u201d

Robinson’s intimation that the promotion of highly-sexual concepts to school children might amount to grooming is not his only reservation about Allison’s approach.

Robinson, a black conservative who has expressed antipathy for identitarian leftist groups like BLM and suggested that women should not be ordained, appears to have voiced traditional and conservative Anglicans’ reservation about the ostensible co-option of the faith by LGBT activists.

According to the Telegraph, Robinson trained to be a priest for years at the University of Oxford. He was set to begin a curacy at a parish in Holborn, London. However, Bishop Jonathan Baker of Fulham turned him down for the role in February 2022.

Beside Robinson’s fidelity to tradition, an email exchange between Church of England bosses indicated that his claims that Britain was not a racist country disqualified him.

Sarah Mullally, the white, female bishop of London, reportedly told Robinson, a black man, to “listen to the lived experiences of ethnic minorities.”

Bishop Baker cautioned in another message: “He is very active on Twitter and has a huge following (100,000 followers!). His political agenda is I guess what you would call libertarian anti-woke, anti-identity politics, Covid-skeptical etc.”

Were racial politics not a pressing matter in the church, Robinson’s rejection of LGBT activist conventions and beliefs would likely have been.

Steven Croft, the bishop of Oxford and senior Anglican cleric, backed same-sex “marriage” and instructed clergy that they were not only to conduct gay “marriages” for their congregation, but were also themselves able to wed a same-sex partner.

This decision runs contrary to Anglican canon law, which prohibits the blessing or marrying of gay couples.

The Church of England has also issued pastoral guidance, adopted at General Synod in 2018, delineating how to approach and accommodate transsexuals.

For Anglicans already baptized who have become transsexuals, “the House of Bishops commends the rite of Affirmation of Baptismal Faith as the central feature of any service to recognize liturgically a person’s gender transition.”

The guide further recommends identifying “the preference of a transgender person in respect of their name and gendered (or other) pronouns.”

Extra to baptism, at least one Anglican church has transmogrified its hymns to keep up with LGBT activists’ preferences.

TheBlaze reported that All Saints with Holy Trinity in Loughborough updated the words to “God Rest Ye Merry, Gentlemen.” Instead of referencing Satan as well as Christ the Savior, the church substituted in “queer and questioning” “women, who by men have been erased.”

It’s not only transsexual parishioners for whom the Church of England has made accommodations.

In Wales resides the church’s first transsexual priest, Reverend Canon “Sarah” Jones, who suggested to ITV that God is “non-binary.”

For Robinson, inclusivity in the Church of England meant his exclusion. He recently left the church to join the breakaway group Global Anglican Future Conference.

u201cThis is Reverend Bingo Allison a trans “priest”nnI guess he missed the part in the Bible where God created Man & Woman.u201d